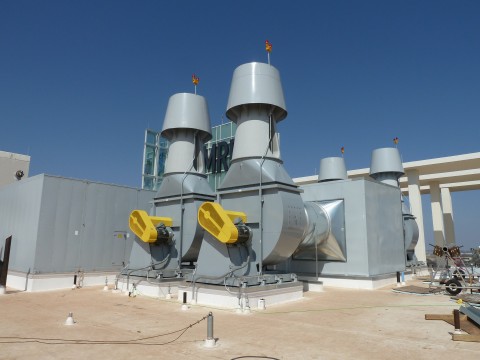 Imagine a typical lab building, university, or pharmaceutical research facility. Years ago you'd have one dedicated fan per system—one hood to one fan. These systems used to be relatively simple in the concept of design. Let's say the lab space had around 40 fume hoods. The ductwork would run from the hood all the way to the roof. Each fan was either in the mechanical area with a stack on the roof or directly on the roof itself.

The problem was that as the industry grew and matured, the logistics of running ductwork from the lab space up to the roof became an engineering nightmare. From an architectural standpoint, an excessive amount of space was being used for this kind of design. That's why systems are now primarily designed to be manifolded. With the move to manifolding, lab design is now probably one of the more complicated aspects of design that we deal with.

Manifolded systems drastically simplify the logistics of running the ductwork. You'll save an enormous amount of rentable space from an architectural standpoint if all the ductwork is manifolded together so that you effectively have one lab room. A classroom with ten labs can be manifolded together into one larger ductwork that's significantly smaller in diameter and/or physical area. That larger ductwork can then run into another common trunk, to a common riser, and finally to a common plenum on the roof.

The complexity lies in the inherent design of the manifold. How can we make sure that the system is balanced from each exhaust hood to the actual plenum on the roof? Years ago, it used to be challenging to figure out how to properly manifold. Now, more and more people have become comfortable with manifolded design. The issue from an engineering perspective has gone away by now.

You first set the system up for a known negative static pressure, which is the amount of suction that must be created so that the air leaves the space. The building space is maintained negatively and you balance that system from the beginning of the ductwork to the end of the ductwork. It's more or less balanced with the same static pressure. Once you've done that, you then have a known static pressure from beginning to end. That's the starting point.

The next thing you have to take into account is the total amount of fume hoods and the general lab space that you want to exhaust. This is relatively easy because all of this information is already known. When you make your static pressure calculation, you have to include all the additional static pressure dependent devices. There may be lab valves, VAV boxes, dampers, or whatever else is in the system. You have to consider carbon filters or standard filters as well. (Due to the nature of what the lab is manufacturing, designing, or researching, you'll want to make sure that it doesn't get into the exhaust environment.)

All of these factors influence the CFM, which is the amount of air required, and the actual resistance of the system. More often than not, the engineer will also add a certain amount of redundancy to make sure the system isn't undersized. It could be from 5% to 10% extra CFM in case a fume hood was missed or someone added a component after the fact. That way the system would still be able to deal with an unexpected increase in the amount of needed air.

The engineer will also account for additional static pressure. If they came up to 3 inches, they'll put down 3 1/2 inches. What was put down on paper may not necessarily be what was actually built. It could be something as simple as a plumber who unknowingly ran a pipe in an area where a duct was supposed to be located. When the HVAC guy comes to run the ductwork, he has to route around the existing obstruction. Those kinds of unforeseen circumstances will add static pressure to the system. The engineer adds extra redundancy to make sure the system will be safe and function properly.