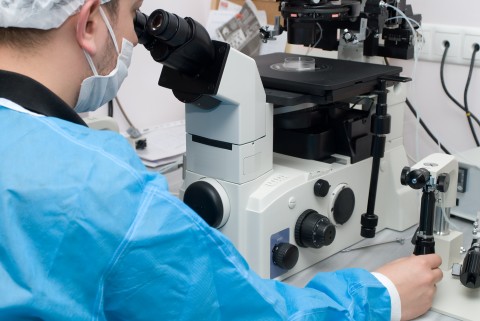 Enter your text There are two distinct ways of doing lab design for most applications: constant volume and variable volume. Constant volume means that the system will never change once it's balanced. The number on the schedule will be checked by the test and balance contractor. They'll actually verify the amount of air once the building is commissioned versus the number that was put on the schedule. Then they'll put those numbers on the fan to make sure it's performing as required. The number will remain the same throughout the life of the system.

Most applications are now variable volume. This kind of system is volume dependent. There are many aspects that will make the CFM required from the building variable. It could be the number of hoods in operation or if the lab exhaust is based on occupancy. If there's nobody in the room, there's a minimum amount of exhaust required. When there are people, the exhaust demand increases. Let's say you have a mouse lab where a certain amount of air needs to circulate through their little chambers. The room with the mouse cages also has general exhaust. This is where the art of lab design comes in.

In regard to the fume hoods, it could be as simple as how many people are running experiments in a classroom. Imagine a graduate school lab class where ten fume hoods are being used to run an experiment. They open up the hood and the face velocity must be maintained at 100 ft/minute. The CFM required will increase to the hood maximum and you'll have full performance. When the hood is closed and in operation, it will take a significantly reduced amount to get that same 100 ft/minute. (It could go down by 90% of the full flow.) That will change the ultimate exhaust requirement.

In our example, the graduate school lab class had all ten hoods occupied because everyone showed up to class that day. Imagine if half the class was out sick (or maybe they took the day off to go surfing). Only five out of ten fume hoods are in operation, so the actual demand is significantly reduced. When they're in a closed sash position with an experiment going on, there's a significantly reduced flow. That's in a single classroom in the building. Imagine what's going on throughout the entire building. The actual requirement for the exhaust space varies in an enormous range from the low point to the high point.

Remember, the engineer may have taken a conservative approach and added some static pressure and flow to his design. The goal is to make sure that the system is never under-designed. Now you have a lab space that's operating at 70 to 80 percent higher than the actual requirement of the building at a given point in time.