The Application of High-Temp Exhaust in Healthcare 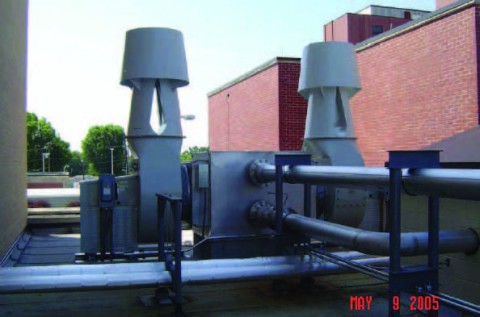 Medical centers and hospitals depend on reliable Information Technology. For example, they use computers to retain patient records and past medical history. Because technology is such an important aspect of the healthcare system, IT departments need to make sure everything works uninterrupted. Computers and networks simply cannot be subjected to power failures. That's why they often have their own dedicated emergency power supply system (EPSS).

In the case of the Anderson Area Medical Center in South Carolina, they had an IT department that needed its own EPSS. They commissioned the services of two companies to come up with a design and analyze the suitability of using backup power generators. (These are essentially diesel Caterpillar generators that generate about 500 kilowatts) After performing their analysis of the medical center, the companies decided that the best place to locate the generators was in the center of the hospital.

The problem that arose was that the diesel exhausts in the generator room were situated in the fresh air intakes. Whenever the generators started up, they would emit noxious high temperature fumes (similar to a car exhaust). There was a real possibility that this exhaust could enter the intake systems for the hospital and make its way into the administration rooms.

The hospital attempted to figure out their best course of action. Could they just use tall exhaust stacks? No, because the stacks would introduce even more problems of their own. There was a likely possibility of back pressure, for example. Because there's not a lot of force when the generators kick in, the exhaust might not even travel up the stacks.

We were approached through our representative in the Carolinas to come up with a solution. The idea we came up with was to use our Axijet® High Plume Dilution Fans as a possible alternative. We worked closely with the hospital and design engineers to make sure we tackled any potential challenges. First, we had to deal with very high temperature exhaust from the generators, which reached almost 1000 degrees Fahrenheit. Then, we needed to determine an effective stack height so that the exhaust could go from the generators past the top of the buildings and far away from the air intake systems.

We cooled down the exhaust to a manageable temperature by using our fans to introduce outside bypass air at a very large ratio. Let's say that the primary exhaust from these generators was about 2,000 to 3,000 CFM. We introduced 20,000 to 30,000 CFM of outside air to cool the exhaust down. By doing that, we also created a mass of air through the exhaust fan. Coupled with the induction entrainment air from our induced flow discharge stack, we were able to create an effective stack height of at least 75 feet. (The engineers said that the minimum requirement to clear the intakes was 74 feet.)

We had achieved our goals in a very efficient way using a two fan system. (One fan was on standby while the other fan was running.) This system has been up and running for about 8 years now. It was our first application, and since then, we've sold quite a lot of diesel generator exhaust systems for healthcare facilities. The end result is a robust, safe, and efficient backup power system.

If you need an innovative solution for exhaust in your application, contact us today. We will work closely with you to develop a plan that meets your needs.