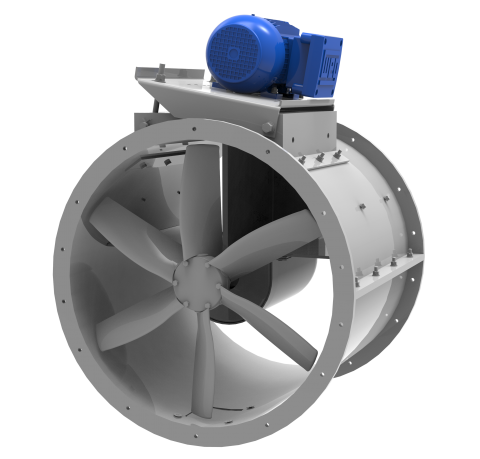 There are two general classifications of fans: centrifugal fans and axial flow fans. What sets them apart is how air passes through the wheel. An axial flow wheel (called a propeller) propels the air in an axial direction with a swirling tangential motion created by the rotation of the blades. The rotation increases air velocity, producing velocity pressure and kinetic energy at very small increases of static pressure.

Axial flow fans come in many different variations, but they all have one thing in common: they rotate about a central axis and move a column of air parallel to this axis. In other words, the air enters from one direction, goes through the wheel, and continues out the other side in the same plane.

Here are the three basic variations of axial flow fans, which all generally have the same performance characteristics.

Propeller fans are the most common type of fan that most of us are familiar with. You've probably seen them in your office or home in the form of an air circulator fan. (It could be a ceiling fan, a desk fan, or a pedestal fan.) It has a propeller and it keeps you cool in warm weather.

We use the same type of propeller fan, but it's called an RFS panel or wall panel fan. Our AXPR model has fiberglass housing and fiberglass propeller blades. It's primarily used to vent out noxious gasses from chlorine storage rooms or wastewater treatment plants.

Tubeaxial fans have the same wheel design as propeller fans. However, they are mounted in a cylindrical tube or a duct, and are often called duct fans. Tubeaxial fans employ a variety of propeller designs. They are designed for use with duct applications, and they are more versatile than panel fans by virtue of their construction. They are also more ductable for ventilation of industrial process.

Tubeaxial fans are able to handle up to four inches of static pressure, and low to high flows accommodate medium pressure. Wall panel fans, on the other hand, won't see more than fractional static pressures because they're not ducted.

Vaneaxial fans aren't used as much as they were in the past. They are essentially the same as a tube axial fan, except they have vanes located on the discharge side of the impeller. The function of those vanes is basically to recover lost energy or rotation. Vaneaxial fans have mostly been replaced with more efficient centrifugal mixed flow fans.

Vaneaxial fans are normally duct mounted inside a building. You can also use them for ventilation. For example, when installed on a roof with a stack cap or damper, you can use them for general exhaust away from the inside of the building and up into the atmosphere.

Getting off on the Right Foot with Fan Start-ups
Fans 101, Part 2: Centrifugal Fans