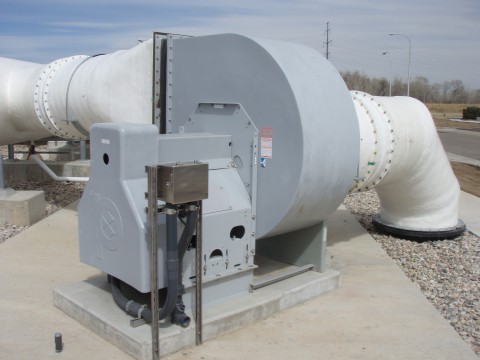 In Part 1 of this blog post, I talked about axial flow fans and how they propel air in an axial direction. This time, we'll investigate the second type of fan/wheel, called a centrifugal fan. Let's take a look at how centrifugal fans are different from axial fans.

First, air enters the impeller axially. Then the air is accelerated by the blades and discharged radially. In other words, the air goes in at the center of the wheel and then it goes out through the blades at a 90 degree angle. As the name suggests, centrifugal fans induce air by centrifugal force generated by the rotating column of air. This produces potential energy by the rotational velocities imparted to the air as it leaves the tips of the blades.

Forward curved fans/wheels, sometimes called volume or squirrel cage fans, use small and numerous impeller blades. They operate at relatively low speeds and pressures, which permits for lighter construction of the wheel, shaft, bearings, and housing.

Our equivalent would be the CNW centrifugal fan, which comes in a relatively small package. These fiberglass fans are used in many different applications, such as laboratory exhaust or ventilation in wastewater treatment plants. They deliver high, medium, and low volumes of air pressure no greater than 6 inches. They are normally selected at about 3 inches of water gauge or less.

Backward incline fans, sometimes called load limiting or non-overloading fans, are the heavy duty centrifugal fan of the industry. They also come in a variety of different styles. The impeller blades tend to be larger and heavier than forward curved blades. They usually number anywhere between 8 and 12 blades.

Our equivalent fan for this type of application would be a DHK model. These can be used in heavy duty applications such as wastewater treatment plants, production facilities, silicon chip manufacturing plants, and semiconductor plants where they are pulling through scrubber systems with high restriction and static pressure.

Radial blade fans are generally smaller, narrower, deeper, and heavier than forward curved or backward inclined fans. The radial blade impeller usually comprises anywhere from 6 to 12 equally spaced flat blades. They're generally simple in design, and they lend themselves to a more rugged construction.

Our equivalent for this type would be our PRVS fiberglass fan. It's designed primarily for low to medium airflows, but quite high static pressures up to 20 inches. This type of fan is often used in wastewater treatment plants and relatively low flow, high pressure applications.

There is also a mixed flow hybrid version that's a cross between an axial and centrifugal wheel. We also use centrifugal wheels in inline fans, and our equivalent would be AXTC or AXCL fans.

To learn more, view the complete list of products that we offer. If you have any questions about using a centrifugal fan for your application, contact us today.